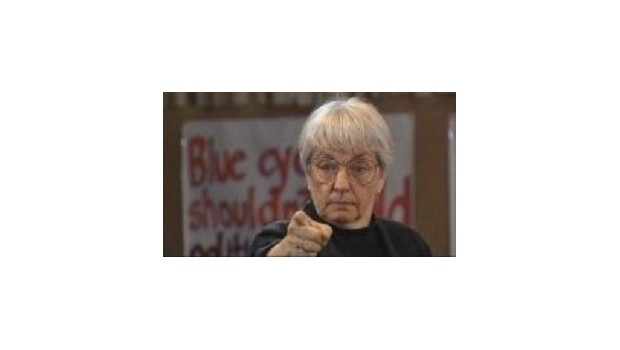 Elliott's exercise, initiated in 1968 as a ground-breaking experiment in anti-racist training, has been featured on Today, the Tonight Show, Donahue, Oprah, ABC News and PBS' Frontline. Elliott believes, Blue-Eyed is by far the most comprehensive and useful video on my work available; it sums up 28 years of experience in schools, universities and corporations."

"A person who has been raised and socialized in America has been conditioned to be a racist. We live in two countries, one black and one white", contends Elliott. In contrast to the more usual encounter group strategy, the feisty Elliott believes it's important for whites to experience the emotional impact of discrimination for themselves.

In Blue-Eyed, we join a group of 40 teachers, police, school administrators and social workers in Kansas City - blacks, Hispanics, whites, women and men. The blue-eyed members are subjected to pseudo-scientific explanations of their inferiority, culturally biased IQ tests and blatant discrimination. In just a few hours under Elliott's withering regime, we watch grown professionals become despondent and distracted, stumbling over the simplest commands.

Back at her Iowa home, Elliott reflects upon how the simple classroom exercise she devised the day after the assassination of Dr. Martin Luther King Jr. has transformed her life. After her experiment received national television coverage, she recalls, townspeople made threatening phone calls, beat and spit at her children and boycotted her parents' coffee shop, eventually forcing it out of business.

Clips from her original classes and interviews with former students confirm that Jane Elliott's workshops make the participants permanently more empathetic and sensitive to the problem of racism. Counselors, student program administrators, corporate trainers and psychologists agree: Blue-Eyed is a film every American needs to experience.